Car & Driver's March 2019 issue includes an article on sound Active Noise Cancellation (ANC) and Electronic Sound Synthesis (ESS). With the September 2019 deadline looming for auto manufacturers to meet PEDESTRIAN SAFETY ENHANCEMENT ACT OF 2010 (PSEA), which governs EV & HEV sound emissions, there is opportunity for new automotive products that detect and emit sound at low speeds in these vehicles (< 18.6 mph). There is also the opportunity for the reverse, removing annoying sounds. Innovative sound creation and sound reduction systems are relying on sensor data to determine what sounds to synthesize and what sound to deaden.

Turns out even EV and HEV drivers like to hear an engine. They like the sound of a revving engine and gear shifting. When they don’t hear these familiar sounds, focus goes to whirring air conditioning fans, regenerative braking whine, and suspension components clunking. 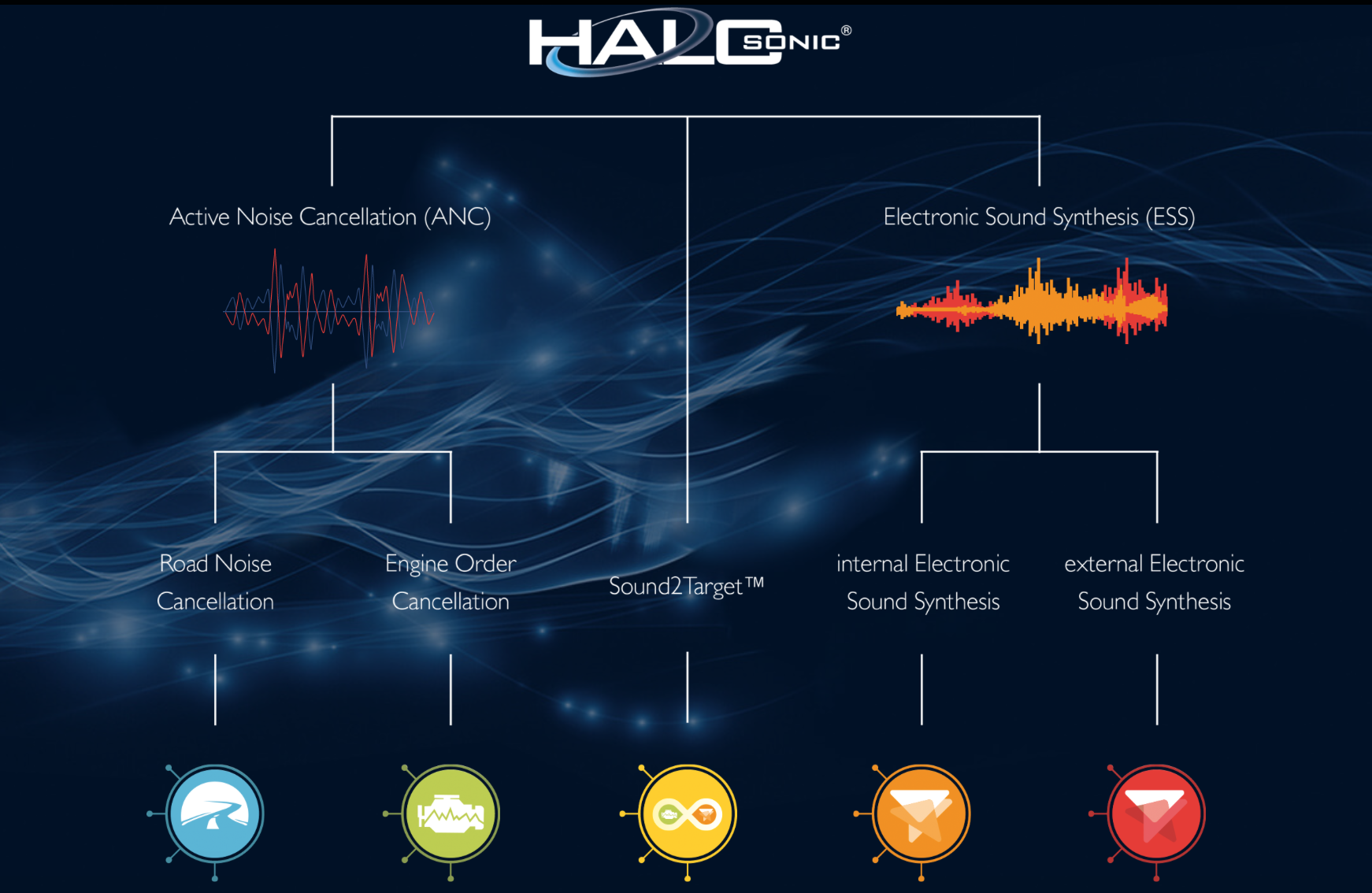 Companies, such as Harman, are working on solutions for automotive manufacturers that will create sound when needed and cancel other unpleasant sounds. Harman’s ESS system helps auto manufacturers meet PSEA requirements and their ANC system deaden sounds without trading fuel economy.

For EVs and HVEs to alert pedestrians and bicyclists at low speeds auto manufacturers are installing ESS systems. Harman’s Halosonic ESS system plays synthesized sound through speakers mounted to the front and rear of the vehicle. Sounds are synthesized by a controller based on data coming from sensors which are measuring how far the accelerator is depressed and how fast the electric motor is spinning.

The algorithm that creates fake-car noise for exterior speakers, also determines what engine noise to play inside the car to give the driver reassurance that the car is running properly. Harman says that obviously fake noise don’t cut it with humans. Their research shows drivers want sounds which replicate real Internal Combustion Engine and drivetrain noises. Sounds must be subtle and not repeat, or they stand out as artificial. Turns out drivers prefer the sounds of a V8 over an artificial sounding engine. 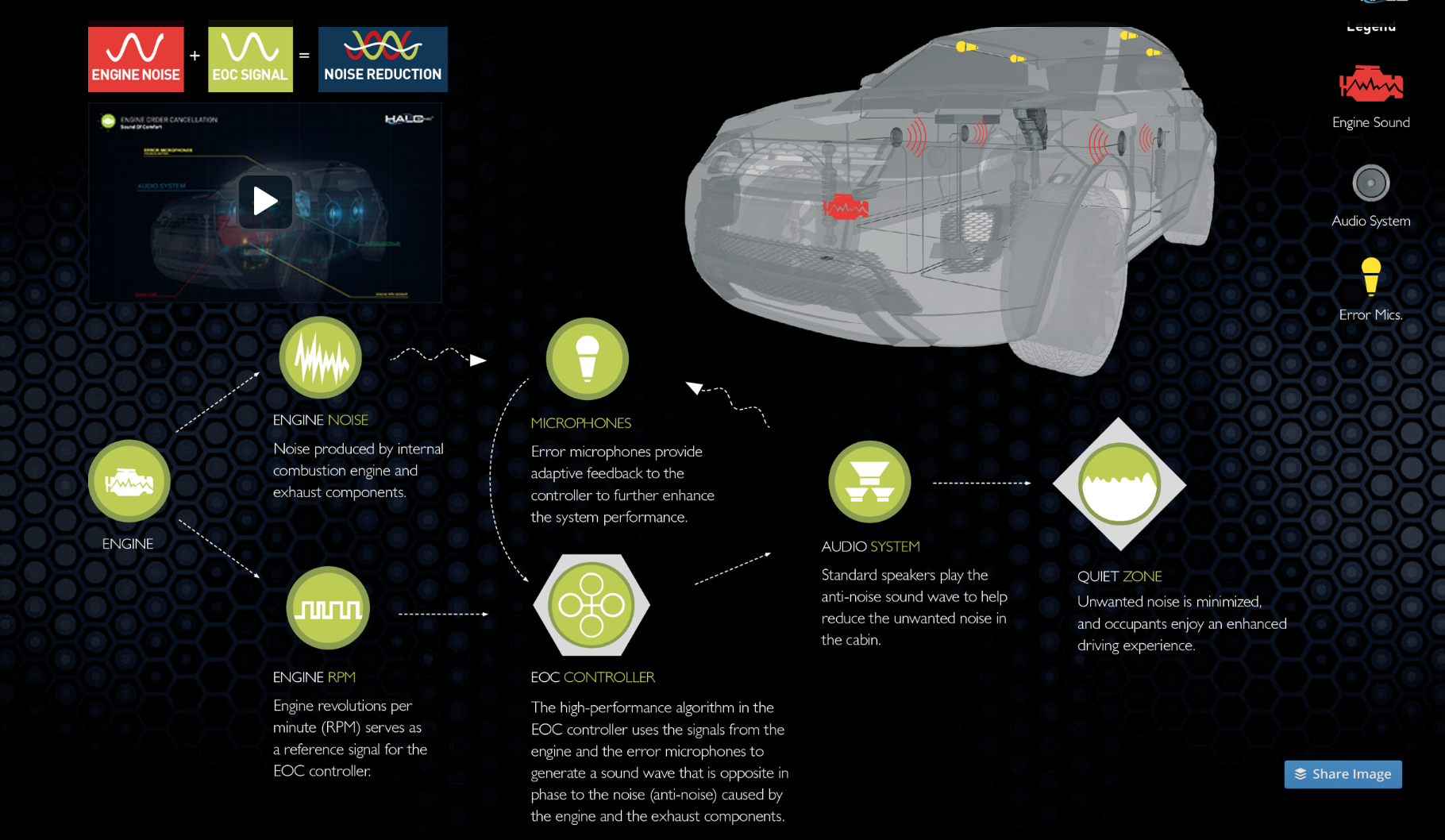 Harman also has automotive ANC systems, to cancel the unwanted noises such road noise and trace sounds. Harman does this in two ways. One system includes mounting accelerometers on the chassis and suspension. The accelerometers measure the vibrations traveling through the car as it moves down the road. This vibration sensor data is analyzed and a signal is sent to a road-noise-cancellation controller. The controller generates matching sound waves 180 degrees out of phase and plays them through the car’s stereo system. The unwanted vibration waves are canceled and passengers travel in sound comfort.

The second ANC system involves microphones on the roof, which capture trace sounds that have slipped through the other system. This vibration sensor data is analyzed and the controller is signaled when further corrections are needed. The beauty of Harman’s ANC system is that the few sensors and controllers in the system are far lighter than traditional sound deadening materials used by automotive manufacturers. OEMs don’t have to add weight to deaden sound. Fuel efficiency and performance don't suffer.

Alongside this article, is a fun chart chronicling the evolution of sound/infotainment systems in automobiles. It follows inventions, starting with Galvin Manufacturing Corporation’s introduction of the in-car radio in 1930 all the way to Apple’s introduction of Apple CarPlay at the Geneva Auto Show in 2014 in a Ferrari FF, a car I’ll never be able to afford. Galvin was later renamed Motorola, a portmanteau for “motor” and “Victrola”.

The chart includes several technologies that never caught on. Chrysler’s 1955 introduction of the in-dash record player, the 1962 4-Track tape player and in 1965 Ford’s 8-Track tape player (available for $35 on eBay for your vintage Mustang). 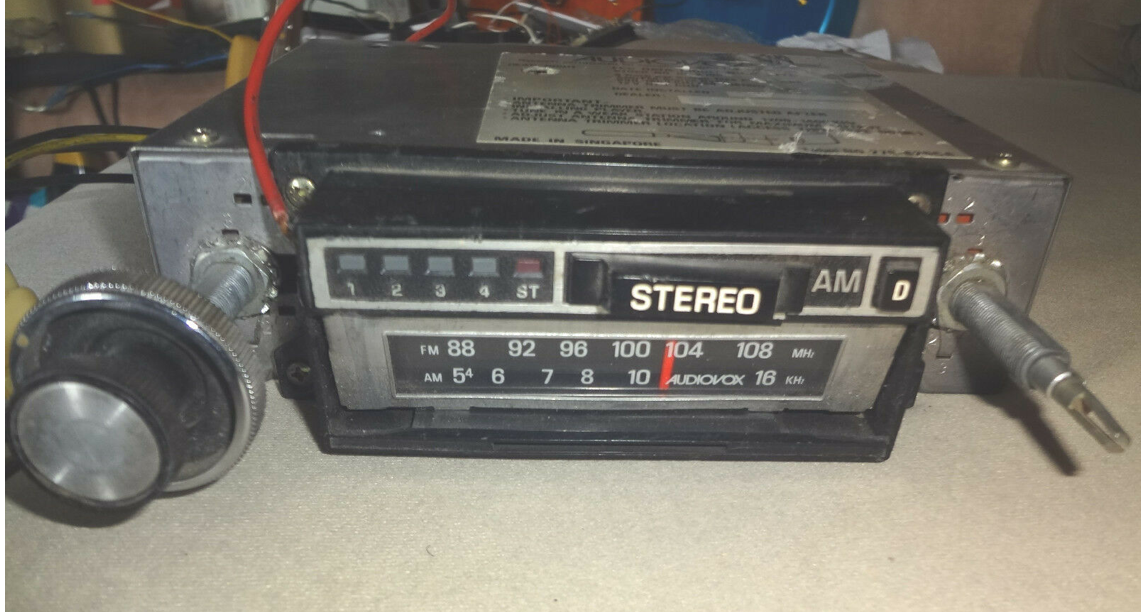 Ford's 1993 minidiscs, even the patented cassette tape adapter in 1988, which I remember using in my old Saab, an early work-around for the now common auxiliary input jack.

And in 2005, technology that is still with us, built-in auxiliary input jacks, rear-seat DVD players, and USB ports igniting thousands of sibling arguments.