I was reminded yesterday of how cars play a role in our identity, and separately how new auto safety regulations for electric and hybrid vehicles create an opportunity for auto manufacturers to be creative. I was picking up my 2011 Kia Optima Hybrid from a car stereo retailer in Austin, and while I waited, I glanced at the stacks of sub woofers waiting for owners. They ranged in price from $149 to over $1000. Admittedly, my family has installed high-end stereos with sub-woofers in cars ranging from a 1992 5.0 Mustang GT to a Toyota Sienna mini-van, however a low-rider in the showroom brought to mind low-decibel vibrations at intersections when, by chance, I was sitting at a red light alongside a low-rider. The car and the sub-woofer are an expression of the driver and their identity.

The car technician was sorting out my infotainment system wiring issues, which came to light when a replacement backup camera was installed over the holidays. The volume controls on the steering wheel were changing broadcasting bands, the phone controls were changing radio stations, interior lighting was not sensing the key fob as I approached, and Apple Car Play wasn’t playing at all. The technician resolved these issues. I let him know I loved my hybrid and he had now restored it so I could listen to my podcasts in peace.

The technician countered that he was impressed with how quiet my car was and how all of the technicians had been alarmed each time he backed the Optima out of the garage. Running only on power from the electric battery, the car’s movement is nearly imperceptible from sound alone. In fact, when I first got my car, I caught myself parking and leaving the car running. When I stepped out of the car with the key fob in my pocket, the car would beep to let me know I needed to turn it off before walking away.

We know the sound of combustion engines, can hear them from a distance and can figure out when a car is approaching, whether or not it is in sight. Electric and hybrid vehicles, on the other hand, can be nearly silent at low speeds and therefore do not alert pedestrians, cyclists and others to their movement, thus posing safety hazards. A number of studies have been published including from UC Riverside, Western Michigan University and the U.S. National Highway Traffic Safety Administration, finding that there are higher incidence rates for crashes involving pedestrians and bicyclists with hybrid electric vehicles (HEV) than internal combustion engine-powered (ICE) vehicles at low speed. The U.S. Highway Traffic Safety Administration study found HEVs were twice as likely to be involved in a pedestrian crash when slowing or stopping, backing up, or entering or leaving a parking space than a conventional ICE vehicle.

Japan issued guidelines for warning devices in early 2010 for low speed electric and hybrid autos and the United States approved legislation in late 2010 for the same. In February of 2018, the U.S. National Highway Traffic Safety Administration issued its final ruling: Electric vehicles will be required to emit warning signals that pedestrians must be able to hear over background noises at speeds less than 18.6 mph (30 km/h) by September 2020. Above this speed, the sound of the auto alone is found to be loud enough to effectively warn pedestrians, bicyclists and others of an approaching vehicle.

Whose Noise is that Noise?

Renzo Vitale—a musician, acoustic engineer and self-proclaimed sound geneticist—presented a TED talk where he points out that these regulations provide an opportunity to mold our environment using a car’s voice. He plays a segment of music he composed as an example of a pleasing sequence that an electric auto’s low-speed warning device could emit.  (It happens to be a music segment he uses on his alarm clock tone). It is definitely Vitale’s signature, as much as the sub-woofer of a low-rider is its driver’s signature.

I have a number of dashboard displays I can chose in my Optima. Several show fuel economy in a number of ways including one where flowers bloom as my "Eco Score" goes up. 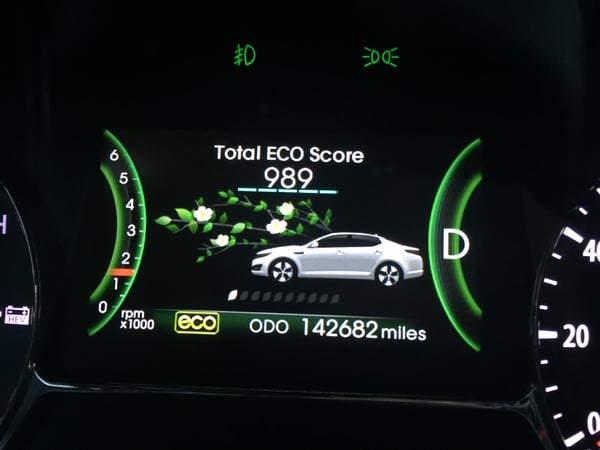 With the Pedestrian Safety Enhancement act of 2010, Electric and hybrid vehicles will be required to emit sounds in unison as they accelerate and decelerate from traffic lights as well as maneuver around low speed areas such as parking lots. What choices will manufacturers offer the consumer? Will we have harmony in C Major or a cacophony of drivers’ unique voices?